Why Aren’t We Talking About Hydrogen?

I’ve been meaning to blog on this subject for quite a while now.

It’s great that renewables are high up on the public agenda these days, with all the talk of electric vehicles, offshore wind farms and tidal arrays. But there’s an obvious gap in the mix, a glaring hole in our thinking, a gap that could quite easily be filled with a technology that might be just as, if not more, important than anything else we are talking about.

The most abundant element in the universe could be just what we need to solve our energy needs for the future.

Electric vehicles are most likely to form the core of our future transport needs, but I think we need to realise that as a power source, electricity stored in batteries is only one option. Hydrogen has the ability to be stored and transported much in the way that gas or petroleum is and we already have a nationwide gas network which has been undergoing a massive upgrading procedure in the last 10 to 20 years. It also might mean we won’t see a mess of cables strewn from the windows of flats in city centres as people charge their cars overnight.

So where do we get hydrogen?

Hydrogen can come from a number of sources, but the one I’m most interested in, which is also the cleanest form of procuring the gas, is electrolysis. If you take some water, pass an electric current through it, the H2O molecules are broken apart in their constituent elements - oxygen and hydrogen. 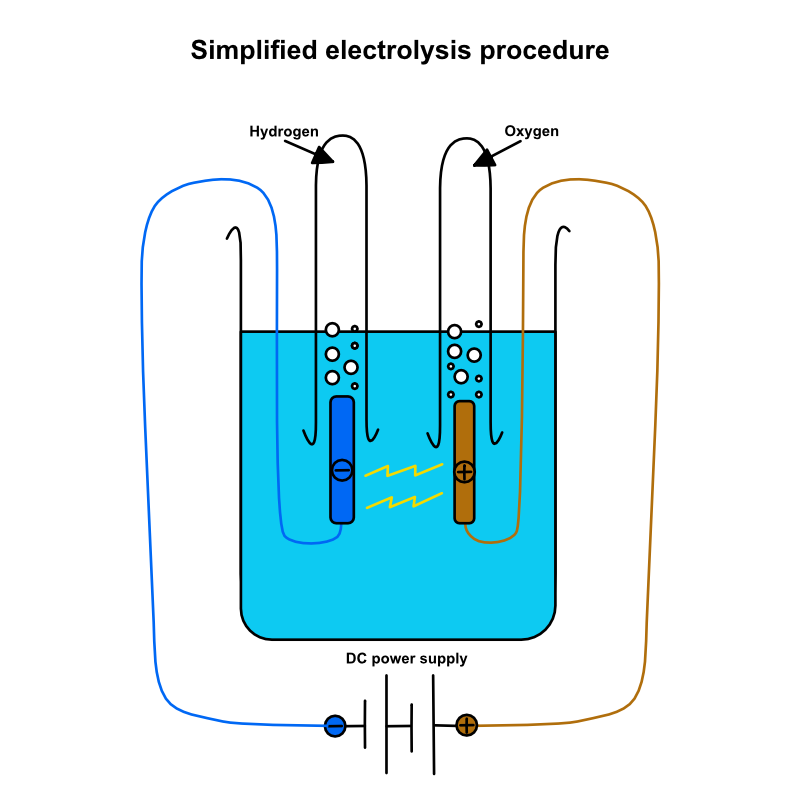 Reverse the procedure and you produce electricity and water.

Talk to almost any climate change sceptic or pro-fossil fuel or nuclear advocate about wind turbines and you’ll get the “too unreliable” argument thrown at you. If the wind doesn’t blow, we won’t be able to produce electricity. If it blows too much, i.e. at the wrong time, when demand is low, the power generated is wasted.

Offshore wind farms are a pretty good solution to the first problem; the wind blows a lot more consistently out at sea.

What about the second? What’s the point in producing electricity if we can’t readily store it (without taking impossibly large amounts of lithium out of the ground)?

Well, how about we insist every offshore wind farm has to have a water electrolysis plant built in the vicinity. We can produce hydrogen and ship or pipe it back to shore (or convert the electricity once it gets to shore, although the first option would be better, because the AC > DC > AC procedure of producing AC at 50Hz can be interrupted at the DC stage and utilised straight to the electrolysis plant), like we do presently for natural gas.

Technology has come a long way since the (whisper it) Hindenberg disaster. We surely now have the means at our disposal to safely transport and store flammable gasses.

What are the government doing about it?

The Scottish Government recently produced their Draft Energy Strategy document and while it is certainly lengthy, there are no doubt some very interesting points in there.

Basically, the Scottish Government are on board with developing hydrogen, although I think personally we could be raising more public awareness of what can be possible with the technology and creating more stimulus for investors to research and develop the ways and means of making it a viable future energy source.

How do you know it works?

There are a number of successful projects already servicing the public, or are in development for deployment in the very near future.

Aberdeen council (believe it or not!) have been pretty enthusiastic about using hydrogen, with the successful introduction of their hydrogen bus project, as well as the biggest installation of hydrogen fuel cells to date underway intended to add to the clean energy needed to run the new Aberdeen Exhibition and Conference Centre that is currently being built.

The islands of Scotland have had a long running problem with power generation - they have enormous potential for clean power generation (electric), probably the best in Europe, but have no way of getting that power to the National Grid. They desperately need interconnectors to take advantage of this opportunity, but the UK government seem to have no intentions of investing in this in the foreseeable future. Too busy throwing money at Hinkley B, HS2 or the myriad of priority London projects on the go (Cross Rail, anyone?).

Attempting to address this is the wonderful Orkney Surf and Turf Project which is already converting previously wasted electricity into hydrogen to be stored and facilitated much in the way I’ve already outlined above.

Another great project is the Levenmonth Energy Project, which also shows great promise in this field.

Who will own it, though?

This is the crux of my apprehension about the production of hydrogen. Look what happened to the promises of “free fuel for all” when Scotland discovered oil in the North Sea - are your bills any cheaper? Mine neither.

We must keep this technology in the hands of Scotland’s people. It needs to be nationalised from the get-go. The Scottish Government should create a publicly owned “Scottish Hydrogen” company - and quickly, like yesterday. Announcements like the abolition of diesel cars in the not that distant future have a way of speeding these things up - we really can’t afford to let this fall into the hands of oligarchies and establishments only out for profit before all else.

So why aren’t we talking about it, then?

Well I am! I urge you to do the same. We need to raise public awareness of this brilliant green energy that is round the corner.

Let’s start talking about it and, above all else, make it happen.

Here are some relevant paragraphs from the Scottish Government’s Draft Energy Strategy:

The pattern of our energy use over the year demonstrates the value of gas in managing the large swings in energy consumption, the seasons drive our energy use up in the winter. This pattern also demonstrates the potential value in storing energy, within days and seasons, to offset energy demand at peak times. Energy can be stored in different ways including as potential energy in pumped hydro storage facilities, as chemical energy such as batteries, biomass or hydrogen or as thermal energy in individual properties (such as a hot water tank or a battery).

A positive contribution from the oil and gas sector Ahead of the United Nations COP21 Summit in Paris, oil and gas companies representing more than 10% of global primary energy supply vowed to strengthen investments in natural gas, Carbon Capture and Storage and renewables. Investment and R&D from these companies could substantially improve the rate of technological development in low carbon technologies.
The expertise gained through 40 years’ experience of operating in the North Sea, such as vital subsea skills, will prove invaluable for the engineering and innovation challenges posed by the low carbon transition.
Scotland’s expanding offshore wind supply chain builds on established expertise and experience in oil and gas and significant investment in port and harbour infrastructure - such as Nigg Energy Park, test and demonstration facilities at Hunterston and Levenmouth - and support for inward investment and supply chain development.In addition, the infrastructure that is in place from our hydrocarbon energy system provides a range of future opportunities. For example, many of the skills and supply chain requirements for future hydrogen infrastructure already exists in the oil and gas sector, with vast experience of producing, storing and transporting gases.

The Scottish Government also recognises the importance of understanding how new energy sources and industries can be developed or introduced in a way that promotes economic opportunity, while minimising any significant additional long-term pressure on meeting Scotland’s climate change targets, or other sectors.

Hydrogen as a means to decarbonise heat.

SUPPORTING THE DEMONSTRATION AND COMMERCIALISATION OF CARBON CAPTURE AND STORAGE AND CO2 UTILISATION. Scotland’s North Seas are the largest carbon storage resource in Europe. Coupled with our existing oil and gas capabilities, ready supply chain, and existing pipeline and platform infrastructure, this means that Scotland is currently the best-placed country in Europe to realise Carbon Capture and Storage (CCS) on a commercial scale.

Scotland’s islands Many of Scotland’s island communities are already successfully demonstrating complex energy solutions: energy innovation is being driven by their isolation from mainland energy and supply networks, and the availability of some of the most powerful renewable energy resources in Europe. Orkney’s role as a ‘living laboratory’ has great advantages in terms of identifying problems and solutions to energy challenges from which other parts of Scotland can learn: Orkney is home to what was the UK’s first smart grid, enabling renewable generation to be connected to Orkney’s distribution network at a considerably lower cost than conventional network connection; Orkney’s ‘Surf and Turf’ and ‘BIG HIT’ projects demonstrate a fully integrated energy model where hydrogen is produced using electricity from tidal and onshore wind turbines, stored in a fuel cell, and used to provide low carbon heat, power and transport. The projects will benefit the community through providing employment and training as well as reduced harbour electricity costs and increased revenue.

Levenmonth Energy Project in Fife uses electricity produced locally by a 750kW wind turbine, supplemented by solar, to produce green hydrogen by electrolysis. The hydrogen it produces will fuel one of the largest fleets of dual fuel hydrogen-powered vehicles in Europe. Powered at site and by an additional dispenser at Bankhead, the system is utilised by the councils own feet of hydrogen vehicles.